The StoryMN slam theme for October is “In the Dog House.” 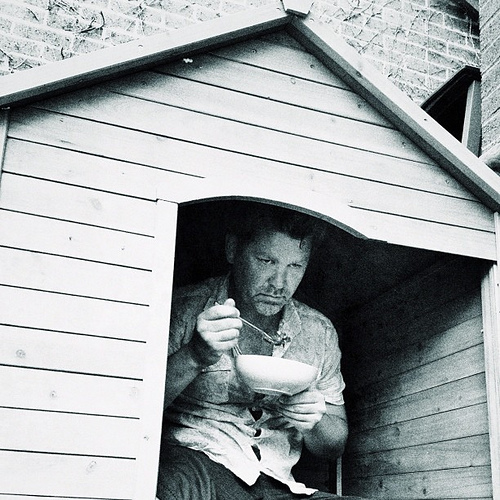 Again, we are working this season with clichés – although where you will find this phrase explained, if you need an explanation, is in a dictionary of idioms.

Allow me my bit of pedantry. There’s a difference.

Idioms are always figurative – they mean something other than what they actually say. Clichés are phrases that have become trite or meaningless through overuse. Using them can make your writing seem shallow, unoriginal. But cliches don’t have to be figurative –  last month’s YOLO, or “you only live once” is certainly meant to be taken literally.

And when you use an idiom you definitely do not want to be original, as any non-native speaker can tell you. Using an idiom correctly depends on getting the phrase and the context in which it can be used exactly right.

Several sources rather confidently proclaim the first idiomatic use of “in the doghouse” is in Peter Pan.

Much as I like to believe this, it’s not true. And it won’t kill Tinkerbell to say so.

The word used in the1911 novel, as well as the play that predates it, is “kennel,” which was more common across the pond than “doghouse” at the time. Nor is the first print usage in the 1926 dictionary of “criminalese” cited by the source that refutes the J. M. Barrie hypothesis.

We can credit Winsor McCay with the earliest use of the idiom in print – between 1904 and 1905. But it was clearly in use before then – note the parentheses – at least in conversational speech.

Winsor McCay was a cartoonist and early animation pioneer – that famous first animation, “Gertie the Dinosaur” was his work. He also did the better known strip Little Nemo, which took the same hallucinogenic approach to the subconscious as Dream of the Rarebit Fiend. Children, however, don’t seem to need melted cheese on toast before bed to be exposed to the darker side of their psyches.

This particular strip apparently accurately reflects the marital relationship between Winsor and his wife Maude.

There’s a song in 1939 by Buddy Jones, and a couple other songs with “In the Doghouse” in their titles copyrighted between 1941 and 1942.

I’m particularly fond of Brenda Lee’s version of “You’re in the Doghouse Now,” from  the Dick Tracy movie. It’s got a lot of sass.

Note that neither of these songs appear to be about husbands and wives. Perhaps that is why I like them. The power dynamic seems more open and playful. More of a choice, even within the roles assigned. I could be fooling myself there.

And then there’s the Ngram viewer on Google Books.

It’s a fascinating tool for visualizing how words and phrases are used over time. The Ngram shows “in the doghouse” peaking in 1942 and declining steadily from there, except for a short uptake in 1952.  So if we really want to consider “in the dog house” an overused cliché, I think we have to admit it is a rather retro one.

And nothing really explains to me why the peak use of the phrase in print comes in the middle of World War II. Perhaps women at home without men all decided they needed dogs to deter burglars, and there were just more dog houses around to be in (albeit fewer husbands to confine there for bad behavior). Still, if you examine the printed matter Google has digitized from the period, you’d think every teenage boy was reading Popular Mechanics and building a home for Lassie.

The gender stereotypes associated with the idiom haven’t changed much since Winsor McKay.

Searching for images related to the phrase, the most popular subgroup is “husband.” The implication is that while a man may think his home is his castle, displeasing his wife is the surest way to get expelled from it; that a husband’s power is in his ability to provide comfort and security, and a wife’s in her ability to withhold it. 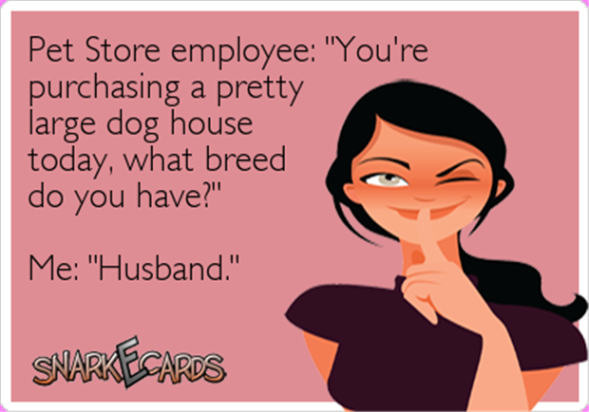 This is not a dynamic that played much of a part in my own marriage, to be honest. That’s not to say that I don’t have a story in mind. One that I think will go beyond snark as well as stereotype. Whether it is slam worthy remains to be seen.

Blogligations: On Breaking the Blog Award Chain »
« The Unravelling

15 thoughts on “In the Doghouse”