Blogging is a tough business.

Not as many as participate in hashtag days themselves, but enough to generate 35 pages of (to me at least) very interesting data. The hashtag days participated in are shown in the response to Question 1 below. 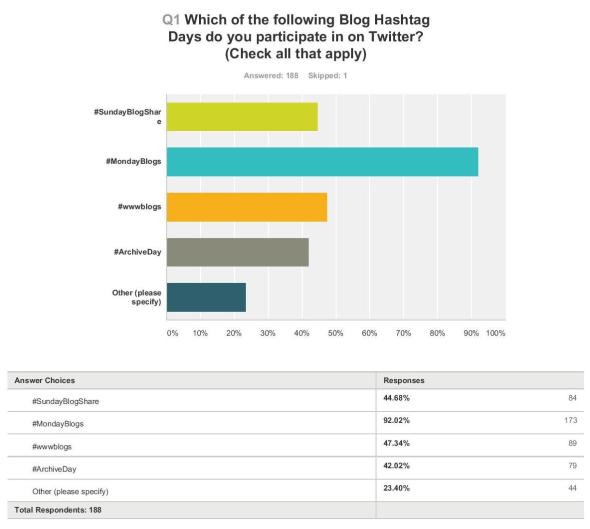 Here I was genuinely surprised. By far the largest percentage of those who responded – 77% – only promote their posts between one and three time a day. 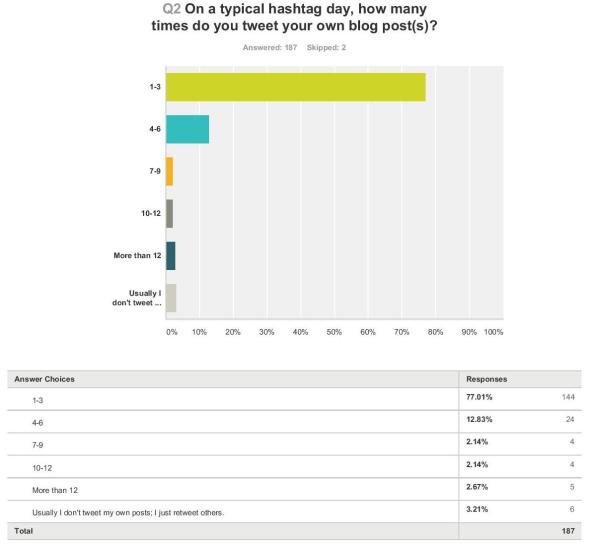 I suspect that many people could generate additional blog traffic simply by posting their content more often. There’s a lot of fear of overwhelming or annoying followers with excessive retweeting that I think is unnecessary, and I’ll address that in next weeks’ post, where I will outline the pros and cons of my own practice.

The third question involved how many times people retweet others’ blog posts. 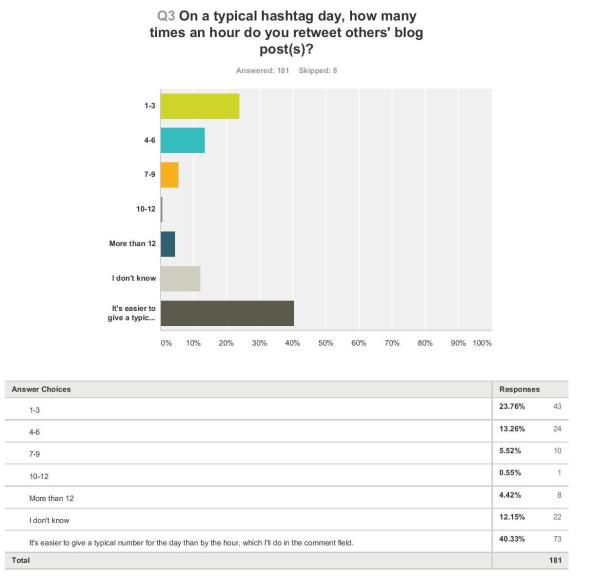 A large percentage here either did not know or were not able to give an hourly tally. For those who were able to give a daily rate, it ranged from 3-4 in a day to “at least 45, usually going to 60.” Often people worked sporadically in sessions around other things they had to do. Some spread retweets throughout the day by prescheduling them. There was concern expressed about spamming followers with retweets, and some were self-limited by a policy of only retweeting what they had time to read and found worthy. 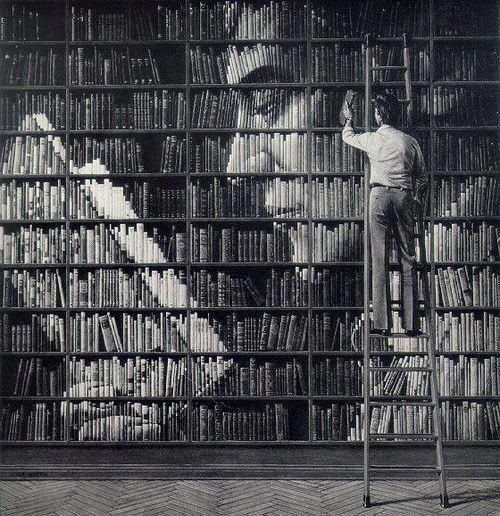 Question 4 involved reading the blog posts of others. 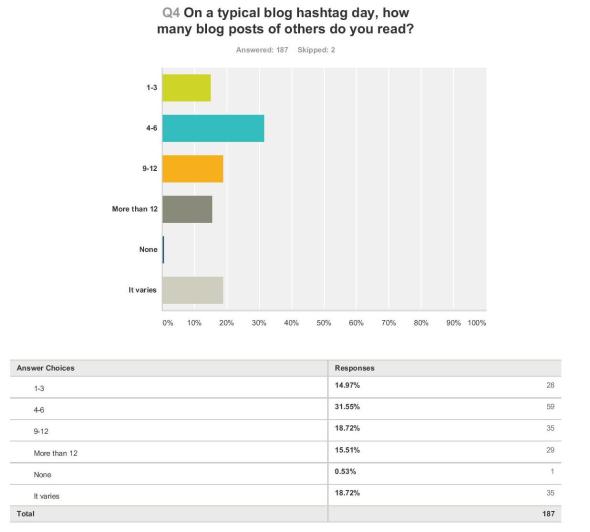 It should be noted here that while about a third of all respondents – 32% – said they read 4-6 blog posts, 34% who responded read nine or more posts on a hashtag day. Someone pointed out that the survey may be self-selecting on this score; after all, people had to read my post to access the survey in the first place.

Question 5 concerned the overall amount of time people typically spend on Twitter on a hashtag day.

If self-reported data is accurate here, 91% claim to spend three hours or less tweeting and retweeting other blog posts. This is divided almost equally between people who report an hour or less (47%) time on Twitter, and those who spend two to three hours (44%).

It could be that people who are not getting as much as they would like out of hashtag days are spending insufficient time sharing the posts of others. The pendulum can also swing in the other direction. I log my own usage on Toggl, as well as the hours I spend on creative work, and the results have frankly dismayed me. Again, this is something I’ll address in next week’s post on my own practice.

With the exception of Question 10, which was completely open-ended, the next two questions were the most frequently skipped in the survey. 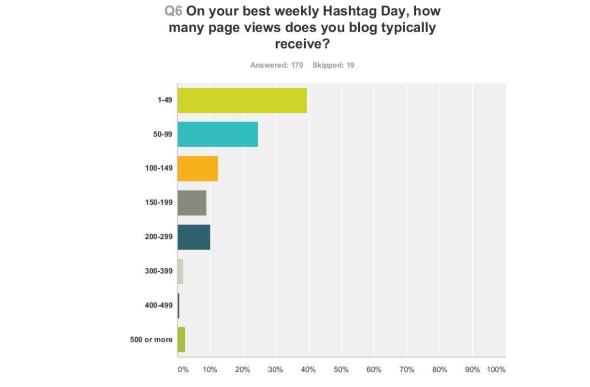 There’s a simple reason for this: may people do not know how to check their blog stats. For each blogging platform there are built in ways of doing so; you can also install Google Analytics on most blogs, though for me what WordPress offers internally is perfectly adequate.

For these two questions, I have combined the tables so that you can better compare the results.

Overall, hashtag days seem to help blog traffic, especially in the higher ranges. If they’re not helping you, you may need to make some adjustments, either to your engagement strategy or to make your content itself more engaging.

Questions 8 and 9 related to what role blogging plays in participants’ creative lives.

The eighth question involved how many hours was spent in creation of a blog post; the second, how many hours a week were spent in other creative endeavors. I probably should also have asked how regularly the participant wrote a new blog post, but alas, I did not. 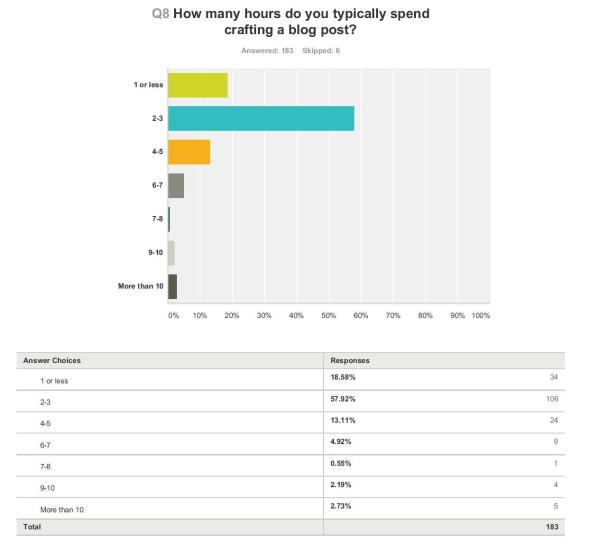 I am not one of the 77% who spend three hours or less writing a blog post, and one of the things I need to assess for myself is whether it makes sense for me to spend as much time as I do in crafting my posts, or whether that energy would be better spent elsewhere. Not that this doesn’t mean I might choose to do something that does not make sense. But at least I will do so with intention.

The ninth question had the most diffuse response of any in the survey.

That’s not surprising. There are people working day jobs and writing at night; people exercising their creativity while working part time or raising a family; and people actually trying to make a living at it.

More power to us all.

I am not going to try to summarize the final, open ended question on what additional things people wish I’d asked.

Instead I will direct you to a pdf of the full survey, which you should be able to download here [this link may not work for some people – see below], and browse at your leisure. All the comments for every question are listed in that document. If you see your own, be sure to wave.

There’s a lot I will be drawing on here, both in the numerical data and the comments themselves, over the next few months, as I refine my own blogging and social media strategies so that they more fully align with my creative vision and practice. To those of you who responded in such detail, I’m very grateful. I hope these responses will give us all food for thought, and a means to make our social media interactions more genuine, purposeful and effective.

[Coda 12:21 PM 3/9/2015:  WordPress used to have a Box widget, which is why I put the full survey pdf on Box.com. but apparently this is no longer supported, and their “embed’ tool doesn’t really embed. Supposedly this is the link to the public folder: https://app.box.com/s/1ezetfr9ofxgap2lhfopanurab9x29b6 and this is the link to the actual survey: https://app.box.com/s/biw2bym9lq8kg1m2oana3n8u0gba0dbm. If neither of those work for you you should be able to go directly to the full survey results here with this link: https://www.surveymonkey.com/results/SM-XMF5CQM7/. Please let me know what does and doesn’t work.]

Are there things you’ve learned from this community survey that might make you change your blogging or hashtag day practice? Why or why not?