Through the Janus Gate 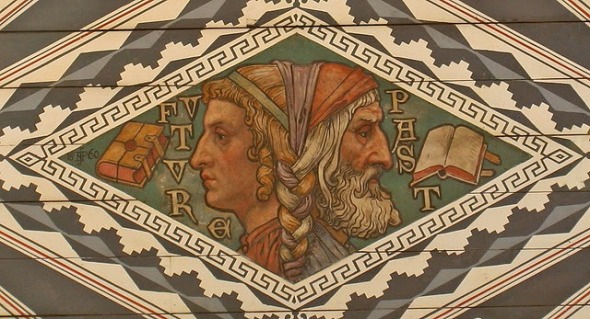 The Roman god Janus is the god of beginnings and transitions.

It is generally thought that January is named for Janus, an animistic spirit who inhabited doorways (januae) and archways (jani). This fits, since January is the door to the new year. But this wasn’t always the case.

Originally the Roman calendar only had ten months and 304 days. The first month was March, which those marching Romans named after the god of war, Mars, who also happened to be the god of agriculture. The depths of Roman winter were simply a “month-less period.” Roman writers differ as to when, and under which ruler, January and February were added, and when January became the first month.

The names of the other months are interesting too.

February is named after the purification ritual Februa held on February 15 (full moon) in the old lunar Roman calendar. April is thought to derive from the verb aperire, “to open”, because this month buds begin to do just that. May and June are probably named after the goddesses Maia and Juno, respectively. July and August were named after divine emperors Julius and Augustus Caesar, though at first those months were just numbers as well: July was Quintillis, the fifth month, and August was Sextilus, the sixth month. You can see the remnant of that ten month year in the (now inappropriate) numerical names of the month: September (seven), October (eight), November (nine), December, (ten).

Did the Romans just get tired of naming months halfway through the year, then?

To the contrary. Once the Caesars began, months were named and renamed after emperors right and left. In AD 37, Caligula renamed September “Germanicus” after his father; the month reverted to its numerical name after his death. In AD 65, Nero renamed April “Neroneus”, May “Claudius” and June “Germanicus,” but again, the names didn’t stick. In AD 84 Domitian renamed September “Germanicus” and October “Domitianus”. Poor Germanicus, like the Roman army, was perpetually redeployed.

The cheekiest emperor where month renaming was concerned was Commodus. He renamed all twelve months after his own adopted names: January became “Amazonius,” February “Invictus,” March “Felix,” April “Pius,” May “Lucius,” June “Aelius,” July “Aurelius,” August “Commodus,” September “Augustus,” October “Herculeus,” November “Romanus,” and December “Exsuperatorius.” (My eyes first read that last one as Exasperatus, which I am guessing is exactly how the average Roman citizen felt.)

Rome was full of ceremonial gateways, or jani.

The Janus Gate. One of the beautiful quilts of Swan Sheridan.

These were generally freestanding structures, used to ensure a symbolically auspicious entrance or exit – though as superstition would have it, you could get this wrong. There were lucky and unlucky ways to march through a janus. The shrine of Janus at the north side of the Forum, the Janus Geminus (twin Janus), was the most famous of these. The doors were left open in time of war, and kept closed in times of peace. During the long period between Numa Pompilus (7th century BC) and Augustus (1st century BC), those doors were only closed twice. War was what Rome did.

Though Janus was usually depicted with two faces looking in opposite directions (Janus Geminus or Bifrons), in some places he was Janus Quadrifrons (the four-faced). The Encyclopedia Brittanica notes that Romans associated Janus with the Etruscan deity Ani – who, as the video below notes, gives us both the word “annual” and “anus.” (There are some playful moments in this slideshow; if you’re easily offended, don’t watch.)

The video is also very specifically dated around the 2012 Mayan doomsday calendar predictions. (Remember those?) There are surprising a number of videos about Janus and January on YouTube, but this is one of the few I could find that was not a Jehovah’s Witness expose of the trick pagans played on us with their calendar. Seriously. I had no idea this was such a big debate.

There seem to be many different legends about the history of Janus.

One has him the son of Uranus and Hecate. Another has the Tiber named after his son Tiberinus, who accidentally drowned there. Yet another legend has him a son of Apollo and the first king of Latium. His colony near the Tiber is supposed to have given the name to the Janiculum Hill. Still another story says that Janus welcomed Saturn to earth after the latter was driven out of Olympia by Zeus. There is also a theory that the cult of Janus was brought to Latium by sailors, and indeed Janus is often associated with ships.

Janus was the gatekeeper; his symbols were a porter’s staff or virga and a set of keys. To illustrate his importance, his name was even mentioned before Jupiter in prayers. Although the first day of each month was considered sacred to him, January 9 was the Agonalia, his particular festival. He protected the start of all activities. He inaugurated the seasons.

This will be a year of both beginnings and transitions for me.

I am grateful for two-faced Janus, gleaning wisdom from the past, but looking toward the future: an essential perspective as I reviewed the resolutions I made last year, and plan for the posts to come.

What new beginnings or transitions do you face this year? Where, and with whom, will you work out their meaning?

Nicholas Poussin, A Dance to the Music of Time, 1639 (Note the statue of Janus to the left.)

Enough Already: Exploring the Art of Contentment »
« Less is More: The Resolution We Both Can Keep

11 thoughts on “Through the Janus Gate”