Bless me Father, for I have sinned. It has been a month since my last blog post. 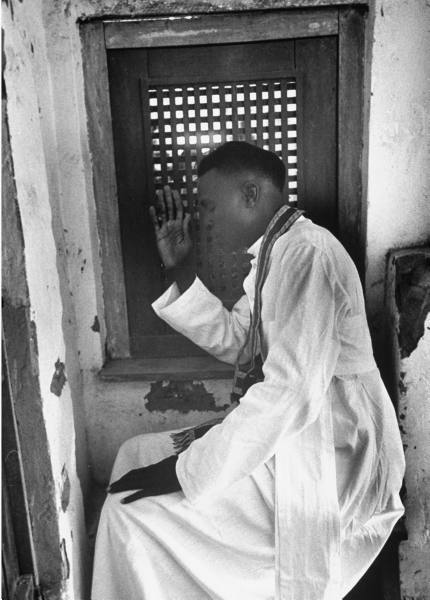 Actually, a few days more than a month. This was an unanticipated break in my exploration of the art of contentment. Or maybe not. Maybe I have been exploring it all along. Nevertheless, it is going to take me a few entries to catch you all up.

As most of you know from my last post, I was preparing for a move on April 24, to a one bedroom apartment. The first place of my own I have had since the recession, and something of a monumental event, at least in my own mind.

I rented a U-Haul truck and hired movers to drive it and do the heavy work.

U-Haul helps you calculate how big a truck you need based on the space you are moving into, and estimate how much time you’ll need the movers for. They also give you a way of factoring in more than one stop if necessary – which it was, because I had a storage unit in the suburbs near my former home for all the things I did not want to get rid of but could not take into someone else’s space.

Based on U-Haul’s formula, I hired two men for three hours and rented a 10’ truck. I met the movers at the store. Independent contractors essentially list themselves on a page of the U-Haul site, along with their prices, service, and reviews. I chose the same company that had put my stuff into storage.

That day the universe saw fit to stage a tremendous downpour. 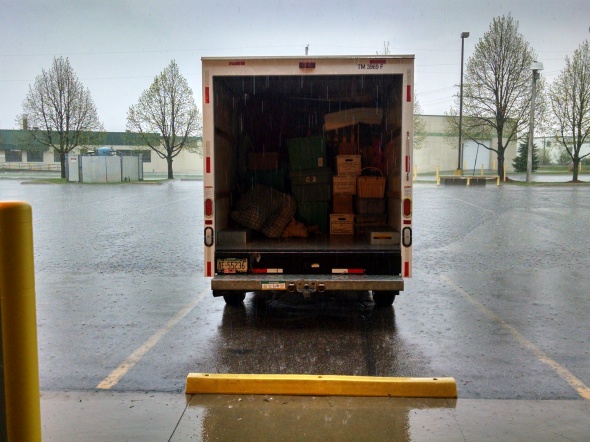 Rather than go to my roommate’s house first, we decided to go to the storage unit, where it would be easier to back the truck up close, and where I hoped the movers (and my things) might get less wet. I was also hoping that the rain might let up a bit before we had to go stomping in and out on the sheets Mare had laid down to protect her carpet.

It didn’t let up. The movers still got soaked. But they were cheerful about it. One of the guys looked familiar. When we opened the unit and took a look at my stuff, he said “I think I remember this rocker.” Turns out he put it in there. “You have a long memory,” I said. “That was 2012.”

After everything from the storage unit had been put in the truck, it was clear U-Haul’s formula had betrayed me.

It was a 5’ x 9’ storage unit. Why I had thought a 10’ truck would be enough for that and the stuff at Mare’s house that I had actually been living with I do not know. We were going to need to make two trips. So we went to the new apartment, which is on a busy one-way street close to downtown, to unload. Fortunately we were able to find a place in front to park.

My unit is on the third floor. One guy emptied the truck. The other guy carried stuff up in the elevator. There is a small storage locker in the basement for things that I don’t need to have to hand, but it is not accessible from that elevator; you have to go to the first floor and then down a flight of stairs. It was clear by now that our timing was going to be tight. I told them to bring everything up to the apartment, and I’d figure out what went down there later.

I paid for an extra hour’s labor to go back to the house for the second trip. Fortunately they had not scheduled another job back-to-back, and that was possible. Our luck was not quite so good the second time finding a place to park. But finally they were done, the truck was returned, and I was alone in my new place.

It is a Come to Jesus moment when a single woman whose children have grown and whose house was foreclosed on is reunited after four years with the contents of her storage unit.

There was some really important stuff, like an orange and green tile trivet made by my daughter in the third grade with gaps between the tiles that mirrored that gap-toothed smile. The story my son wrote in Eagle Harbor about Black Charcoal the Axe. My grandmother’s haunted sewing machine. And all the toys my eventual grandchildren were eventually supposed to play with when they eventually came to visit.

Then there were things that just made me shake my head as I unpacked. A set of dishes that hadn’t sold at the garage sale we had. Hairbrushes my daughter had left behind when she went to Korea to teach. If she hadn’t wanted them, why had I saved them? A plethora of bud vases. When have I ever used bud vases, and why did I now have so many? Had I really thought there would be a place in my new life for a 30 foot outdoor orange extension cord on a reel? 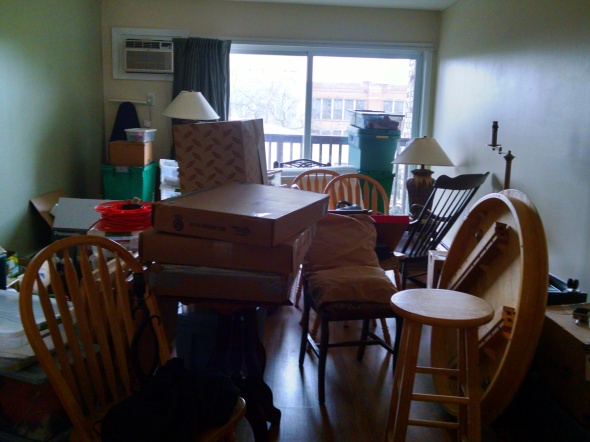 I have wanted to pare down my material possessions for some time now.

To embrace minimalism even more than I had. I had been thinking of the storage unit as a challenge in that regard. But surrounded by boxes and boxes of battered things, littered in mouse droppings, it was all too overwhelming.

The ratty Ikea particle board desks and bookshelves oversized for the space. The chair bed I thought was a good idea at the time, but could not remember how to move from one position to the other. The lamps bought to go with a sofa and chair I no longer had. I was on an archaeological dig through my own past. I sat in the midst of all that clutter and let the question arise. What on earth have I done with my life?

I have a friend with whom I occasionally talk about regret.

About whether it is ever a reasonable emotion to indulge in. Is it related to grief over the options that die each time we make a choice? Or it is just maundering guilt and shame that does nothing to move us forward?

Of course when I am feeling better, I know better. Though there are many binary choices – either this or that – our emotions around those choices, and the way they affect other people, are far more complex and nuanced. They also come and go. In the move I have had discouraging moments. I have had creative, energizing moments. And gradually I am carving out a space that feels like home. 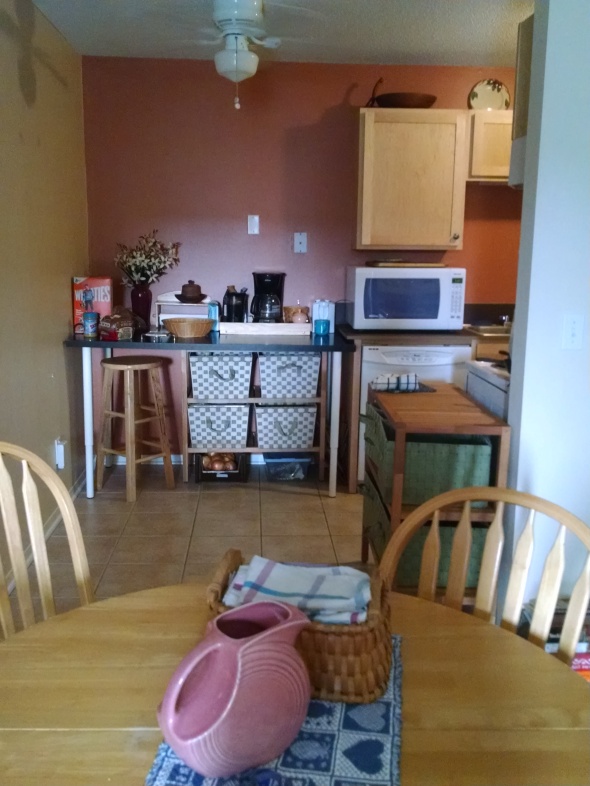